It has finally come to that time when the parents come to question to value of Gossinian Ministries. At last, their impatience has erupted as the parents of the young people have grown sceptical of my ability, yet to see my competence match my confidence. They want me to direct the youth in bible study, but I want the guide the youth into thinking for themselves; again, it is the war between thought and society.

I have arrived at a conclusion; I will teach them the Scriptures, and yet, the Scripture often differs from “Christianity.”

Whilst I am not sure I will go so far as to say there is no such thing as a Christian, I will say that there is a major difference between “Christianity” and “Culture” which both “whites” and “blacks” seem reluctant to distinguish between. This confuses me, for if we are to take “the truth as the authority” then surely we must begin by dispelling illusions, with the first being the “identity” of Christ. I agree, we ought to pay less attention to who Christ was and realise “what” he did, and yet, this is still evasive, so lets begin with an affirmation. “He’s Black, let’s move on.” 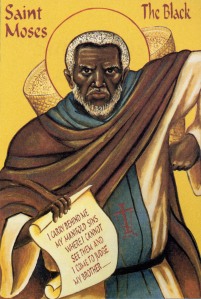 It was ordained clergyman Pastor Colin Akridge who affirmed this when, in April 1998, he debated Ashra Kwesi. In this debate “The Physical Resurrection of Jesus Christ: Myth or Reality” after the longest time, Akridge concluded that Jesus, although not “African”, was from a black people born out of Egypt. He is not, however, the only person to acknowledge this. Jane Elliott has said this, whilst Timothy Wise has asked his fellow white people to allow Jesus to be white for a day. (So far, no response…)

According to Banchie Darkwah (author of “The Africans who Wrote the Bible”), seconding the sentiments of Ashra Kwesi, Europeans who “forged” the bible were very conscious of their deliberate deception. In order to dominate and subjugate the Africans, they had to remove the divinity of their culture, and this began with Christ. The Europeans, in writing themselves into history, John Clarke asserts, had to subvert the image of Christ, and so, as Kwesi argues, the enemy has become the deity. The European essentially “stole” the religion along with the land.

If this is the foundation of Western Christianity, then I wonder: in teaching these young people the bible, and revealing to them the truth, where do I start?

1 Response to Africans Wrote the Bible